This was the release I was waiting for! The installation was a bit of a trouble but it was surely worth the effort. Its really the first Fedora release that I really liked. Its stable, has good hardware support and boots really quickly (<20 seconds on my system).

In my case, Windows 7 RC was already installed on one partition, so Fedora 11 (x64) was installed in second partition. So, now I have dual boot configuration – the windows boot loader presents option to continue booting windows or launch GRUB from Linux partition. I didn’t want GRUB to be present in MBR as I experiment a lot with Linux system – so, its better if I have a working system even if I blow up Linux installation :)

The installation was smooth except for the disk partitioning step. Anaconda kept crashing while creating partitions. After a few attempts, I finally got this partitioning scheme:

/boot FS type has to be ext3. Its not allowed to be ext4.

The system failed to boot after installation! For some mysterious reasons Linux installation overwrote MBR even though I selected Linux boot loader to be installed on boot partition. Fortunately, the recovery was easy. I rebooted with Windows 7 DVD and it presented Repair Windows –> Startup Recovery option which allowed recovering the MBR. This at least allowed Windows to boot again. Phew! But now, there was not trace of Linux. We have to now setup Windows to dual boot Linux.

Win7 uses something called BCD (Boot Configuration Data) to manage boot loader related stuff. With Windows XP you could simply extract first 512 bytes from Linux boot partition using ‘dd’ command, save this file in ‘C:\’ and add an entry for this boot sector file in ‘C:\boot.ini’ file. However, with BCD things are bit complex – boot.ini no longer exists. After lot of googling and experimentation I could not figure out how to add entry for Linux in Win7 boot loader. 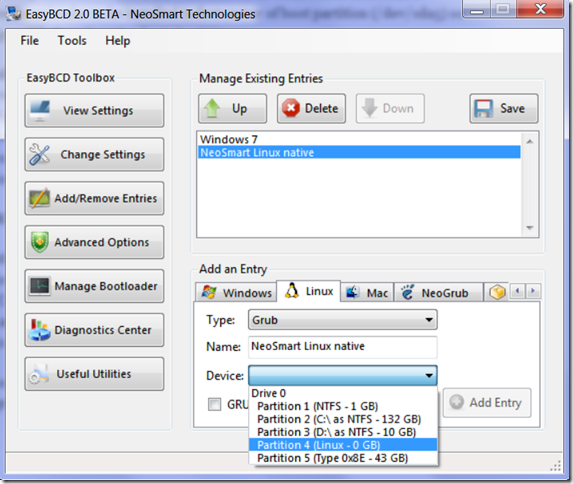 While adding the entry, select Linux boot partition from ‘Devices’ list. In above case, Partition 4 is the boot partition. Remember that /boot partition is only 200MB and only ‘Partition 4’ is listed as ‘0 GB’, so we can guess that this the one we need to select. I selected the entry name as ‘NeoSmart Linux native’ but you can be smarter and call it ‘Fedora 11’ or something.

Once the entry is added, you will see it listed as one of Windows boot loader boot options. Selecting it will take you to GRUB installed on the Linux boot partition. That’s it!

Fedora is now up and running natively. Everything worked out of box. Wireless network detected, suspend and hibernation worked perfectly. The KDE 4.2 looks simply awesome!

Only thing that’s a bit annoying is that tapping on touchpad is not detected as a click. Till now I haven’t found a solution for this. Also, this system has switchable graphics (ATI FireGL 5700 / Intel integrated crap). I have set integrated Intel graphics card as default in BIOS, so I don’t how well ATI plays with this version of Fedora.

As expected from a Linux box, MP3 and tons of video formats do not play by default. With Fedora 11, fortunately its now almost trivial to get these working.

This installs lots of codecs (as dependency of smplayer) to play nearly all file formats: flv, mpg, mov etc. etc.

Since this is a 64-bit system, you need to download Flash Player 10 pre-release from here:

tar-unzip the file and copy the libflashplayer.so file to /usr/lib64/mozilla/plugins. Restart Firefox and test with some YouTube videos.

Install yum-presto plugin. This causes yum to download only the ‘delta’ between two version of packages resulting in much smaller download during upgrade.

and now, upgrade all packages: