Often, you have more than one system at your disposal but no clear way of distributing your compilation workloads over to all or some of them. They might be running different OSes which makes it look even more difficult. In my case, I have one laptop (2 cores) and a desktop (4 cores) connected with a WiFi network. The laptop runs Linux (Fedora 13 64-bit) while the desktop runs Windows 7 (64-bit). I wanted to somehow offload Linux kernel compilation over to my powerful desktop and keep my laptop cool :)

distcc comes to the rescue! distcc is a program that can distribute builds of C, C++ code across several machines on a network. Its a fairly well known program but slightly problematic to setup. It took me few hours to setup everything correctly but now it all works like a charm. I hope this short tutorial will help you get running in minutes :)

So, here is what we need to do:

Before we can go ahead with above, we need to install Linux VMs (I used VirtualBox) on the desktop since its running Windows. I created two Linux (Fedora 13, 64-bit) VMs where Linux Kernel compilation can be offloaded. Each VM was assigned 1G of memory and 2 vCPUs each (a single 4 vCPU VM was quite unstable). In general, you need to have both client and server with the same platform (32/64-bit) and the same compiler versions otherwise you can run into weird compiler/linker errors or even worse, undetectable errors!

Firstly, you need to install distcc on both client and server – distcc calls machine(s) where compilation actually happens as server. So in my case,  VMs on the desktop will be servers. Almost all Linux distributions provide distcc in standard repositories. On Fedora, all you need to do is:

NOTE: do not create these symlinks such that they take precedence over your actual compilers, otherwise it will try to offload all kinds compilation you do on the client. In general, its not useful to offload very small compilations.

Now we need to configure distcc on both client and server. On client side, we need to list servers where we want to offload compilation. On server side, we need to give “authorized” client IP address(es) and port where distcc daemon will listen for client requests.

Where 192.168.1.{10,11} are IPs of Linux VMs running on my desktop. The ‘lzo’ option tells distcc to compress object files as they are transferred over the network. This slightly increases CPU usage on both client and server but is useful if you have a low bandwidth network. This configuration completely offloads compilation to server. In case you want to local machine to also participate in compilation, change above to:

As another example, you may want to restrict usage of local machine, so it can remain cool and most of the work is done by other servers:

This restricts the number of compilation threads on local machine to 1. Remaining threads (as specified from make –j parameter) go to other server(s).

Server side configuration: Among other things, we need to provide list of allowed client IP addresses (by default, all IPs are blocked) and the port where distcc daemon will listen for client requests (default port: 3632). On Fedora, the configuration file is /etc/sysconfig/distccd (the exact location may be different depending on your distro). In my case, two Fedora VMs on the desktop were distcc servers, so I need to enter the following configuration on both of them (config file: /etc/sysconfig/distccd)

This specifies upper limit on number of parallel jobs on server, range of allowed client IPs, port to listen on and the log file (by default it spams the system log file: /var/log/messages). The USER option is useful if distccd daemon is started as root, in which case it is changed to user USER. See distccd man page for more details.

Of course, you need to change the user. Now, verify that it started successfully with: ps awwx | grep distcc

We need to open TCP port 3632 (or whatever port you specified in distccd configuration). For this, insert following iptables rule in /etc/sysconfig/iptables

This must be inserted before any other REJECT rules. Alternately, you can use GUI like system-config-firewall to open TCP port 3632. In fact, this is what I used and the above configuration line is auto generated by GUI.

All set now, its time to build! Now, for whatever compilation you want to distribute using distcc, issue build like this: PATH=$HOME/distcc:$PATH make –j8

This PATH prefix makes sure that those distcc symlinks get priority over the real compiler. This also gives us the control to use or avoid distcc easily – just don’t use PATH prefix as above and you will fall back to local compiler.

The distcc man page specifies that number of threads (make –j parameter) should normally be set to twice the number of available CPUs to cover for threads blocked on network I/O.

In my case, I have 2 VMs each with 2vCPUs, so total of 4 CPUs. Sometimes, I also add ‘localhost’ to distcc server list, so I can use 2 cores on my laptop too. With a total of 6 cores, my Linux kernel build time (with default Fedora 13 config) came down from over an hour to just 20 mins!

I used Linux kernel just as an example but you can distribute build of any C/C++ code with distcc. Throw-in the power of Virtualization and you can even use a mix of Linux/Windows, 32/64-bit machines.

You can easily monitor how your build is being distributing among servers with either ‘distccmon-gnome’ or ‘distccmon-text’. 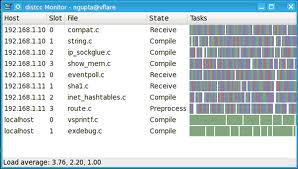