As part of my job and for hobby projects, I often have to work on large C codebases (particularly, the Linux kernel). Like a great majority of developers, I spend almost all my work time understanding these ever evolving, huge code bases.

Few years back, the only tool I found usable for this purpose was VI editor+cscope. However, this combination falls short of various features which modern IDEs provides that make life so much easier – graphical call graph/tree, integration with SCMs (Git, Perforce etc.), integrated disassembler, access to previous queries and other conveniences typically provided by GUI environments like better use of multi-monitor, widescreen setups and so on.

Such large C based projects typically have their own build systems with compilation offloaded to separate cluster(s). Also, kernel debugging is really not something which is very feasible to do within IDEs. Thus, what is needed for such kind of work is a simple GUI application which can overcome various problems with classical VI+cscope combination, some of which I listed in the beginning. Integrated build system, debugger etc. provided by typical IDEs is simply not required.

Since last 1 or so year I (and various teammates) have been hooked to KScope which is a KDE based frontend for cscope+ctags. In particular, it can show graphical call graph/tree which is extremely useful. However, it lacks integration with any SCM (so cannot view diffs with previous revisions), no integrated disassembler and so on. Initially, I decided to work on extending this great tool but soon realized that its not feasible:

Add to all this the fact that the KScope (only) developer has now left the project and considering above all, its difficult to jump in and maintain this dying project.

So what now? The need for such a tool led me to start a new project: KXref which is going to be a KDE4 based code-reference tool. It has lots of features planned which I missed the most in KScope (details on project home). Its backend for code cross-referencing will be GNU Global which is under active development, has good roadmap and supports incremental update even toady.

Currently, only bare bones have been developed and the progress so far has been slow partly due to the time factor and due to my fear of C++ in general. I’m also a relative newcomer to KDE programming. However, I regularly dump down any new ideas on the project page – at least this part I’m enjoying :) If you have any time and some KDE/Qt programming experience or some ideas to share, you are surely welcome! The project badly needs contributors :)

As I said, the project is in very initial stages and its really too early for screenshots – anyways, here is what is looks like today! 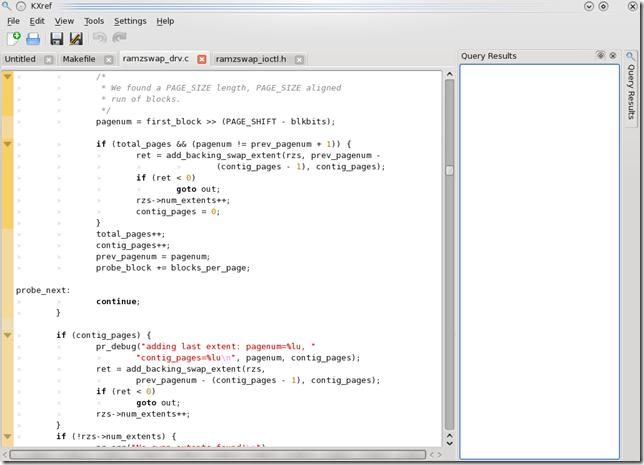